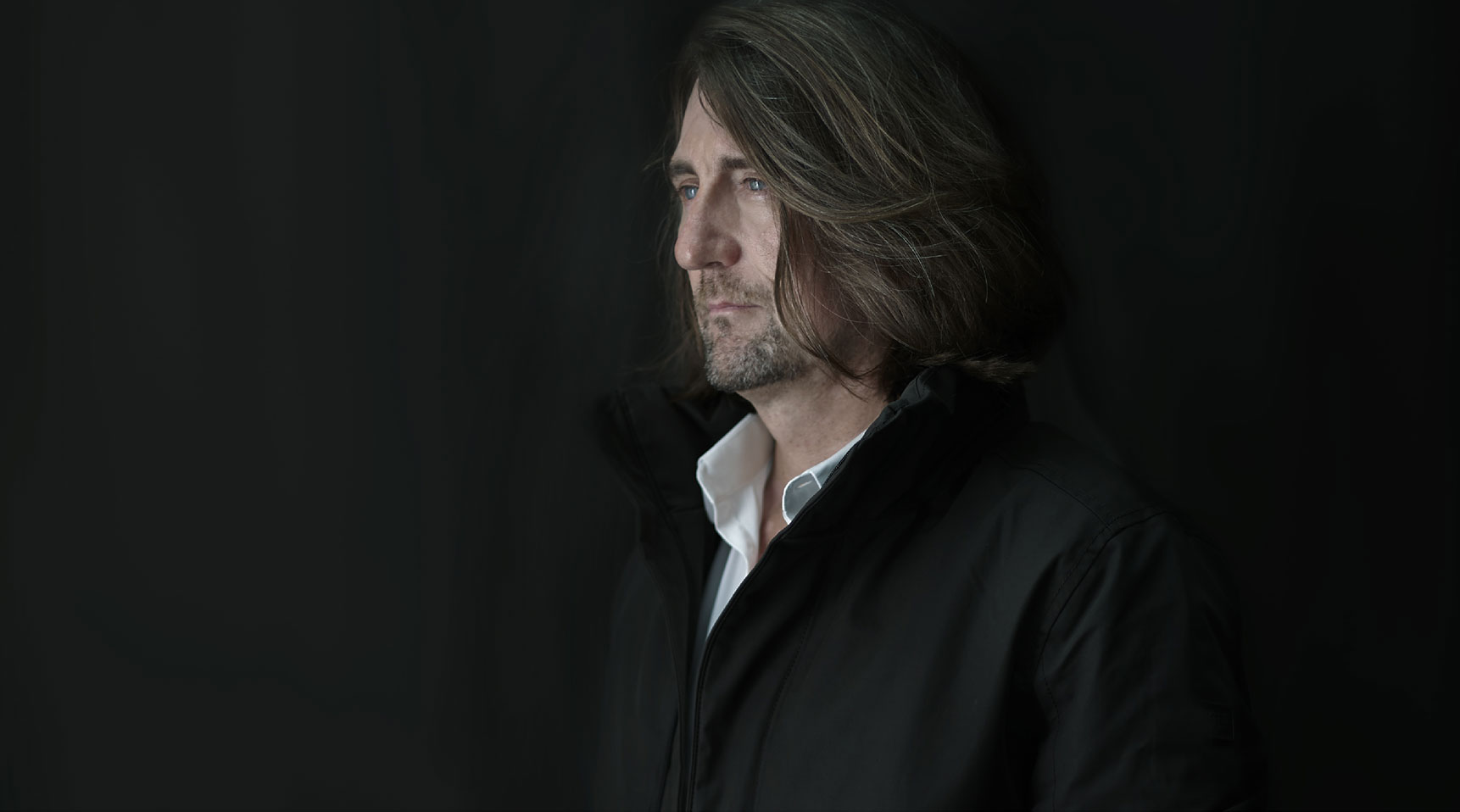 TL- MAGAZIN #32 ANNIVERSARY ISSUE, COVER ART & INTERVIEW AND EXPO 2020
Jörg Bräuer pursues his poetic and aesthetic quest, focusing on landscapes, architecture and still lifes with a pictorial quality that exposes the finer details with great depth and contrast, revealing the restrained beauty that inhabits the unknown world around us. 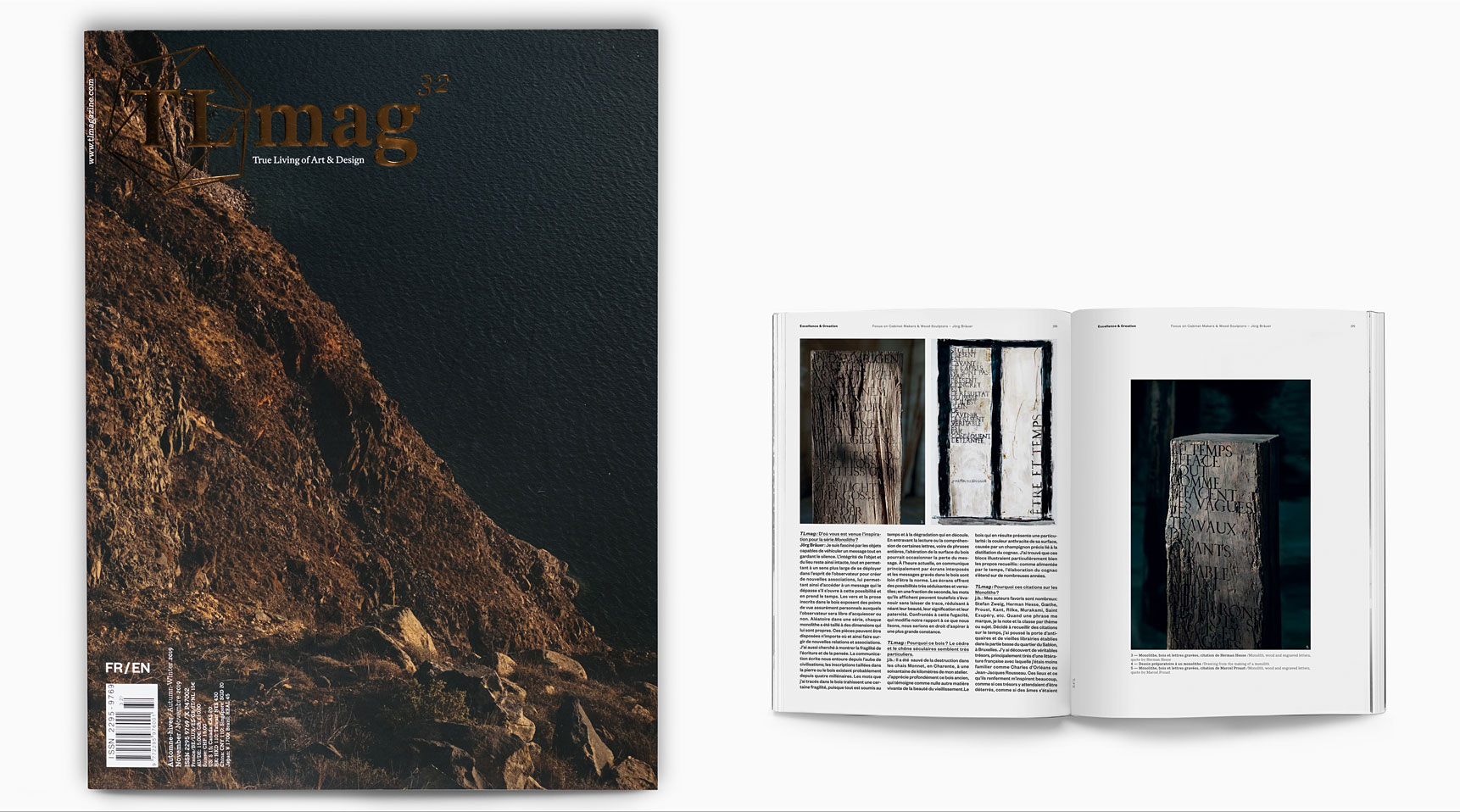 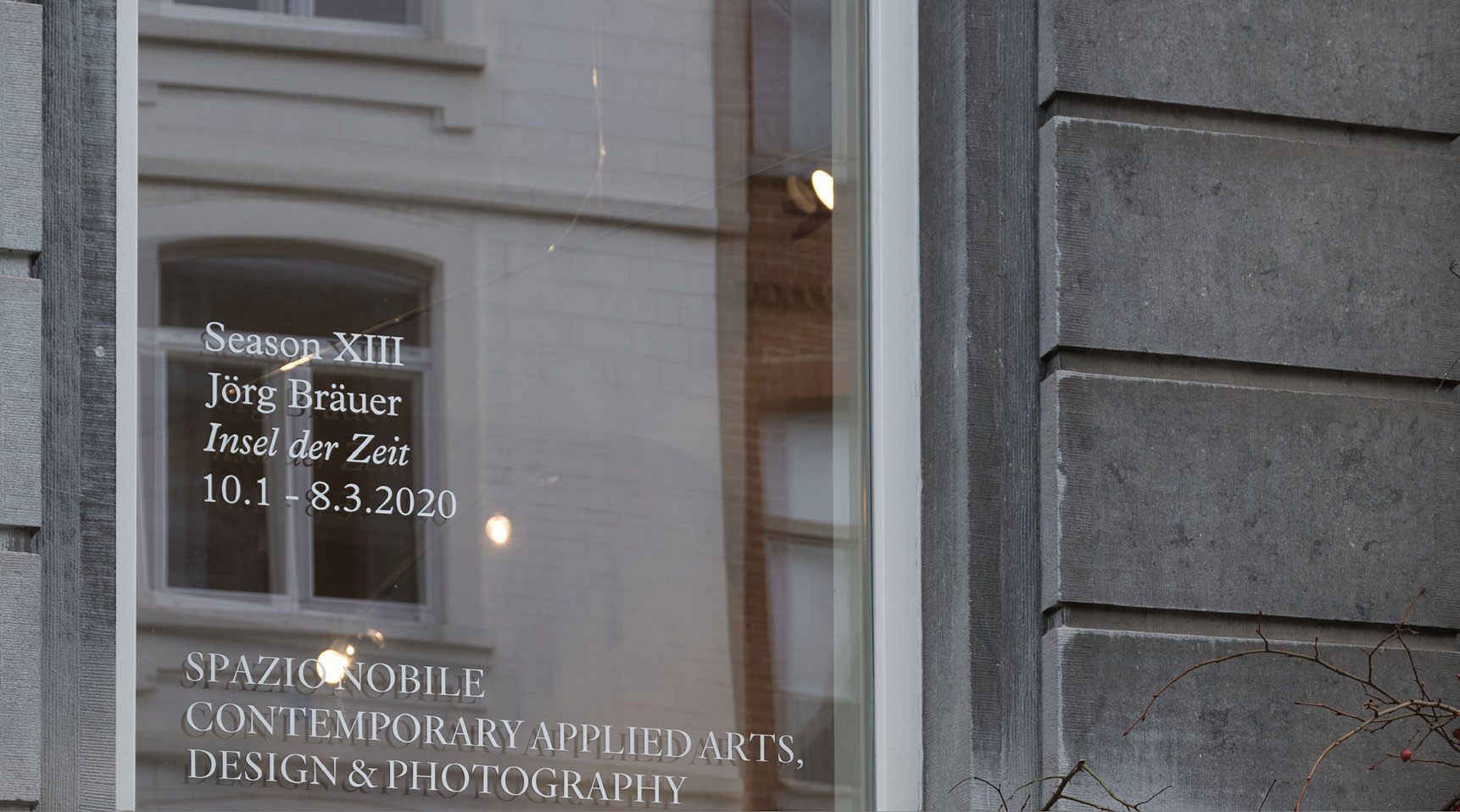 Text by Mechteld Jungerius
TLmag: Monoliths will feature in your upcoming solo exhibition at Spazio Nobile in 2020? Can you tell us about the show?
JB: The exhibition will examine how humans stand in relation to time and space. A dialogue of textures, materials, and different approaches in the perspectives of nature. The exhibition will consist of poetic, conceptual and abstract work, including a photographic series of Icelandic landscapes, which have a fascinating abstract quality called asperity. It will feature a series of work titled Ceps, about roots, ageing and wine, and work from Anthology, a series of paintings about the poetry I see in nature, along with the Monoliths series. 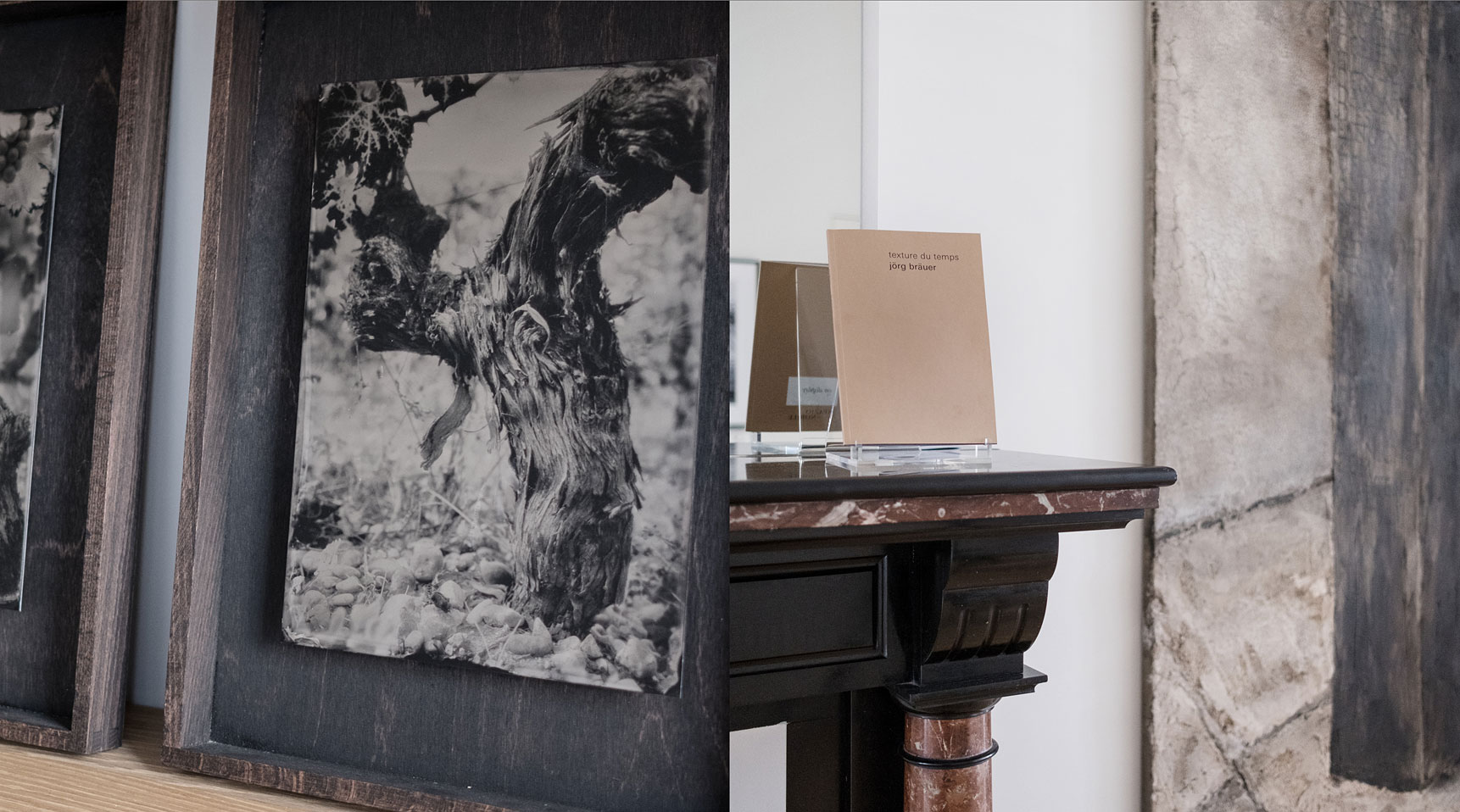 Ceps – L’ enracinement du temps, 2018
Series of Wet plate collodion – ferrotypes
TLmag:What was your initial inspiration for the Monoliths series?
Jörg Bräuer (JB): I am fascinated by objects that convey a message in silence. The integrity of the object and place stays intact in this way, at the same time something larger can unfold inside the mind of the observer to create new associations. There is a message that transcends if the observer takes time and opens up. The poetry and prose carved into the wood are certainly personal statements and the viewer might agree or disagree. Each monolith has been cut to a unique height and all are individuals forming part of the group. The work can be placed anywhere to make new connections and associations. I also wanted show the fragility of writing and thought. Communication by lettering has been around since the early days of modern civilisations. Human inscription into stone or wood is probably 4000 years old. My lettering in the wood is relatively fragile as everything is exposed and degrades with time. Some changes in the wooden surface make it difficult to read or understand certain letters or sentences, so the message and content might get lost. Today we mainly communicate on screen and very few people make engraved letterings on wood to communicate. This on-screen lettering is very attractive and versatile, in less than a second it can all disappear without any trace and the beauty of meaningful words and authors are lost. This change affects our relationship with what we read and we might demand something more solid. 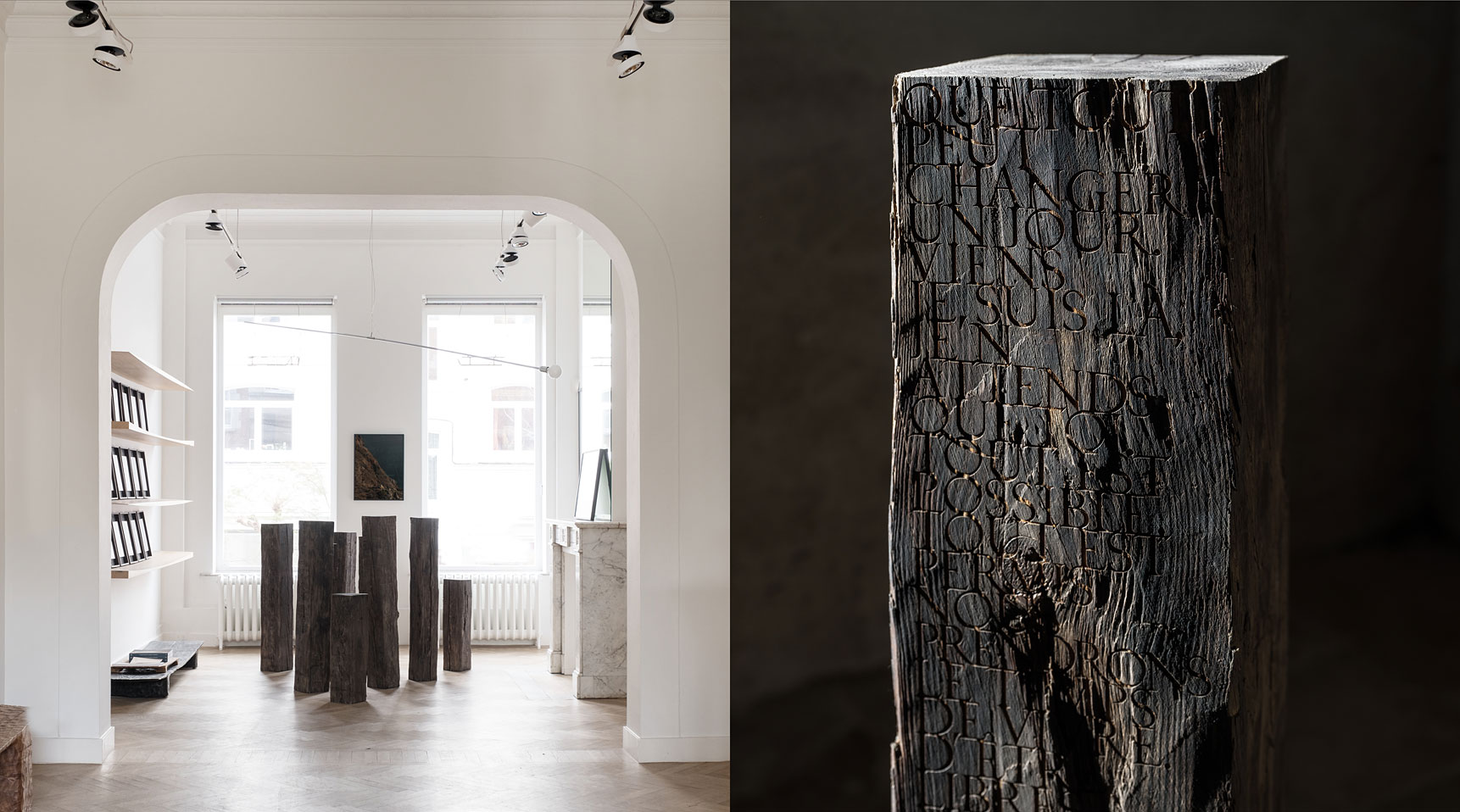 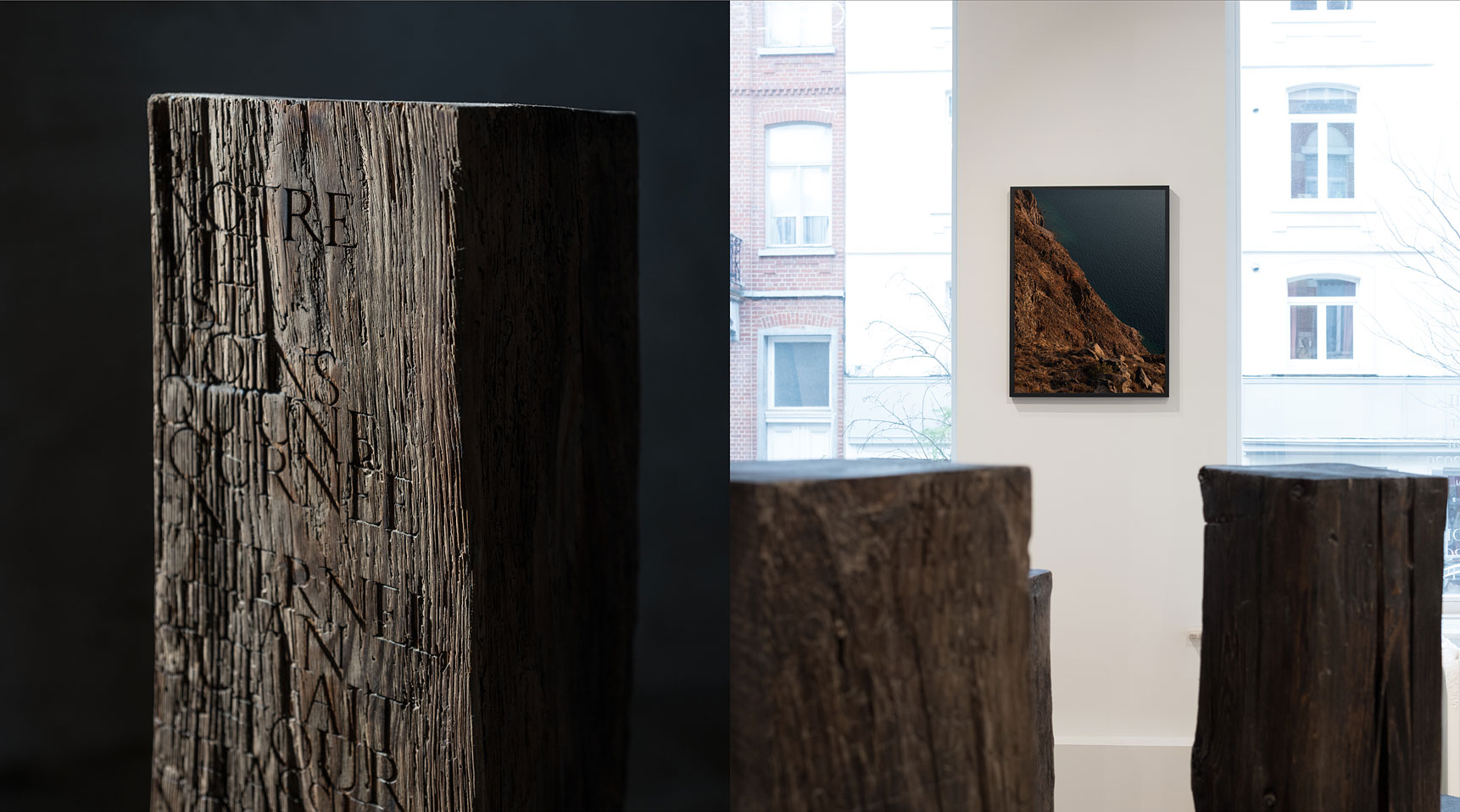 Monoliths – Texture du Temps, 2019
Hundred year old cedar wood with engraved lettering
TLmag: Why this wood? The 100-year- old cedar and oak wood seems very particular.
JB: The wood was recovered from the old Monnet cognac distillery in the Charente about 60 kilometres from my atelier in France. I like this old wood very much, like any other living element it shows the beauty of time as it ages. The Monnet wood has the particular characteristics of the anthracite surface, which is caused by a special cognac mushroom in the distillery. I found the woodblocks well suit the subjects, as the process of the elaboration of cognac takes many years, and it is nourished with time
TLmag:Why these quotes for the Monotliths?
JB: Some of my favourite authors include Stefan Zweig, Herman Hesse, Goethe, Proust, Kant, Rilke, Murakami, Saint Exupéry… and when I am struck by a particular sentence, I note it down and mark it by subject or theme. When I decided to bring together a collection of quotes about time I also researched in antique shops and old libraries in the lower part of Sablon in Brussels. I discovered small treasures of mostly French literature that I was not familiar with, such as Paul Verlaine, Charles d ́Orléans and Jacques Rousseau. I am very inspired by these old bookshops and discovering new treasures as if they are waiting to be liberated again. Sleeping souls halted in small heavens on earth waiting for their rebirth. It was also a beautiful collaboration with my partner, Anne Derasse, and art historian who is very engaged with French and German literature; As she read, she would suggest passages that connected to the project. She suggested quotes connected to time, discovered during her reading. 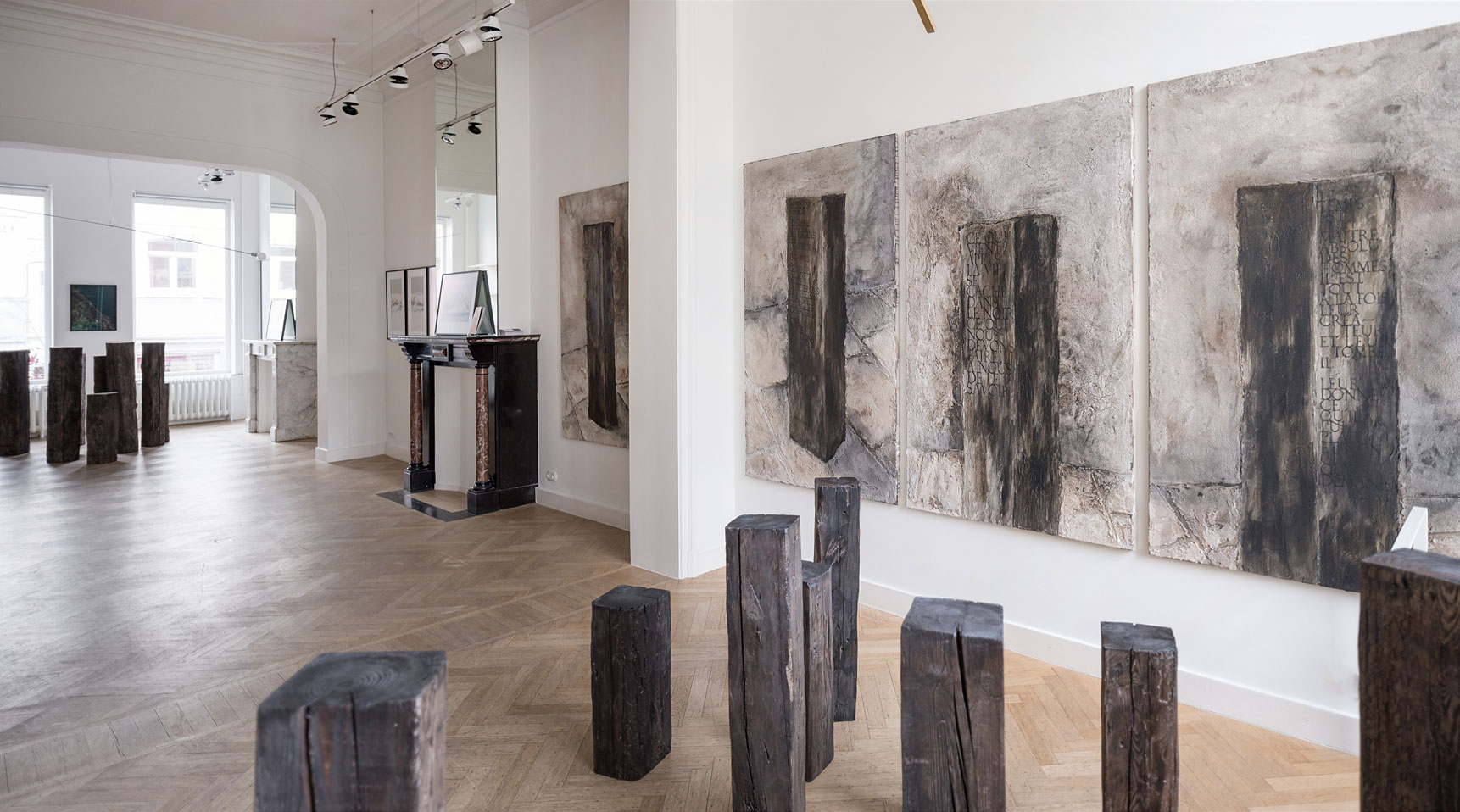 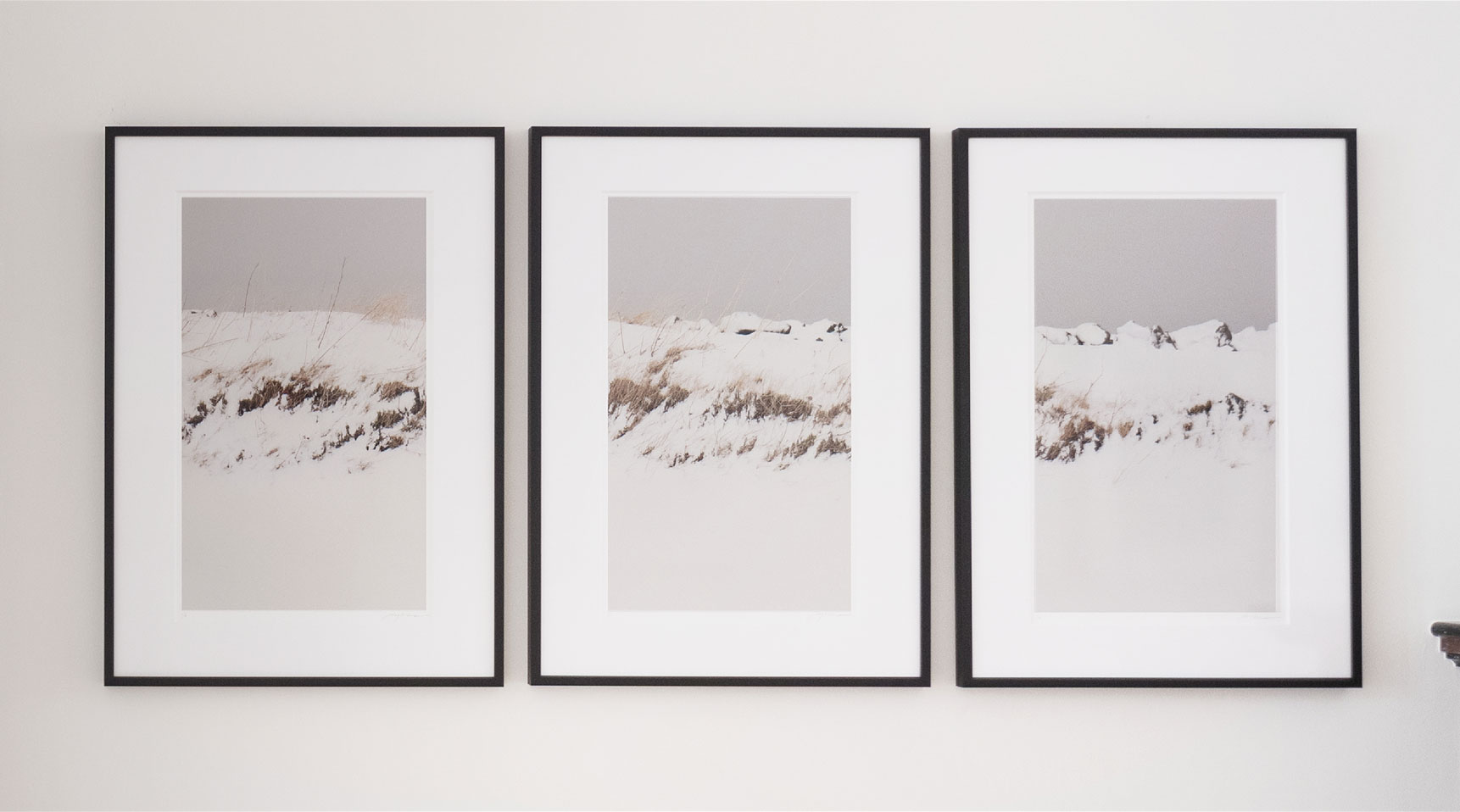 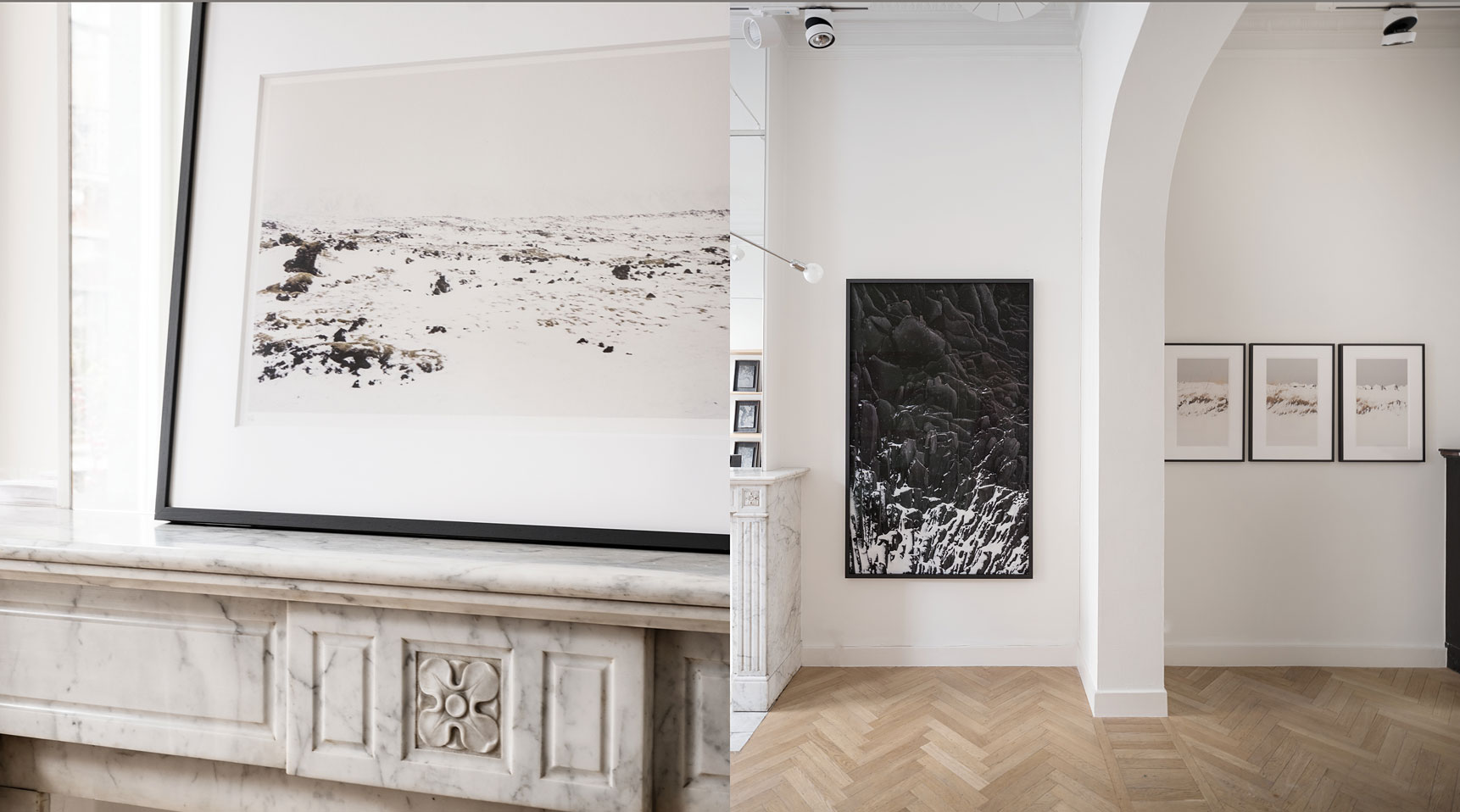 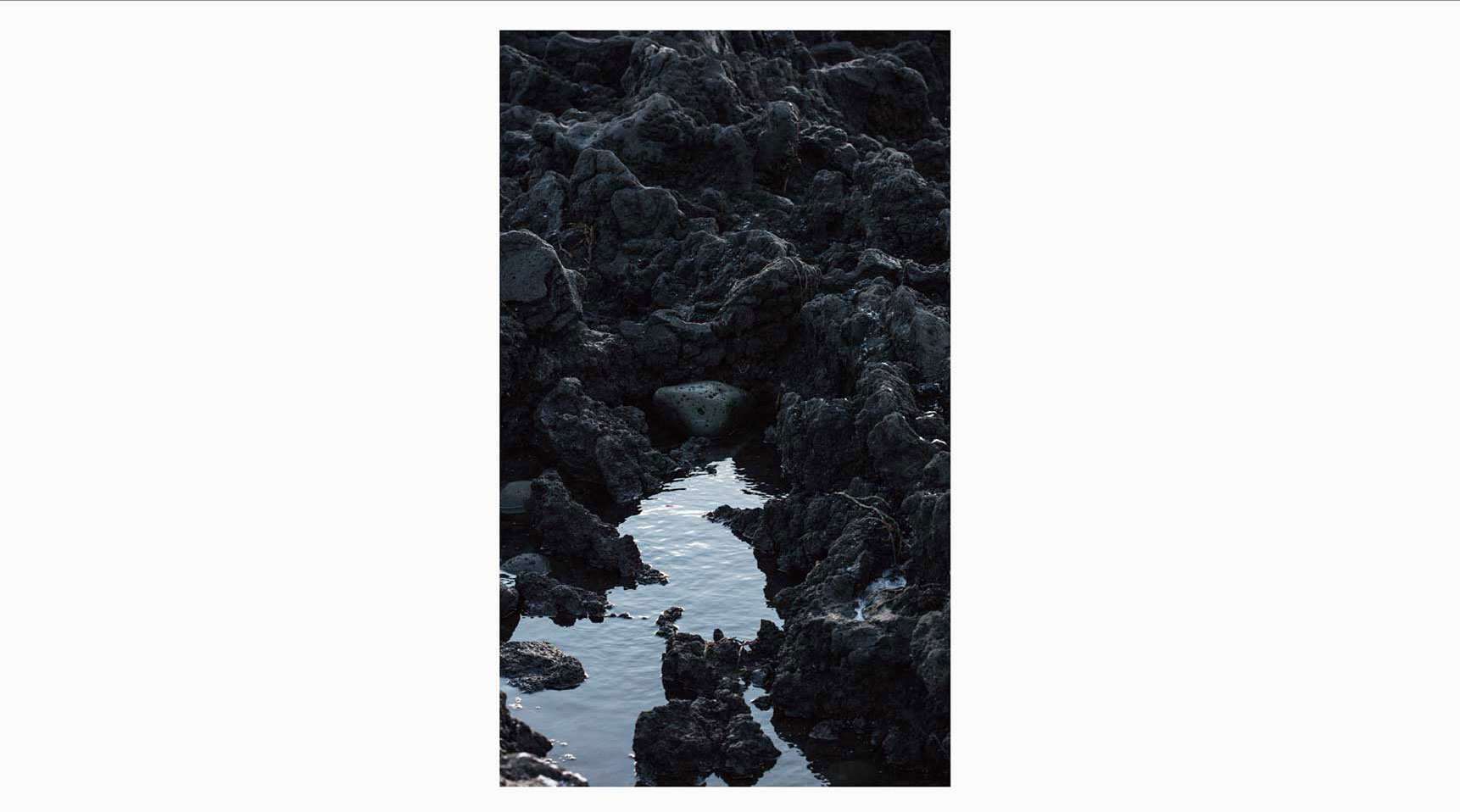 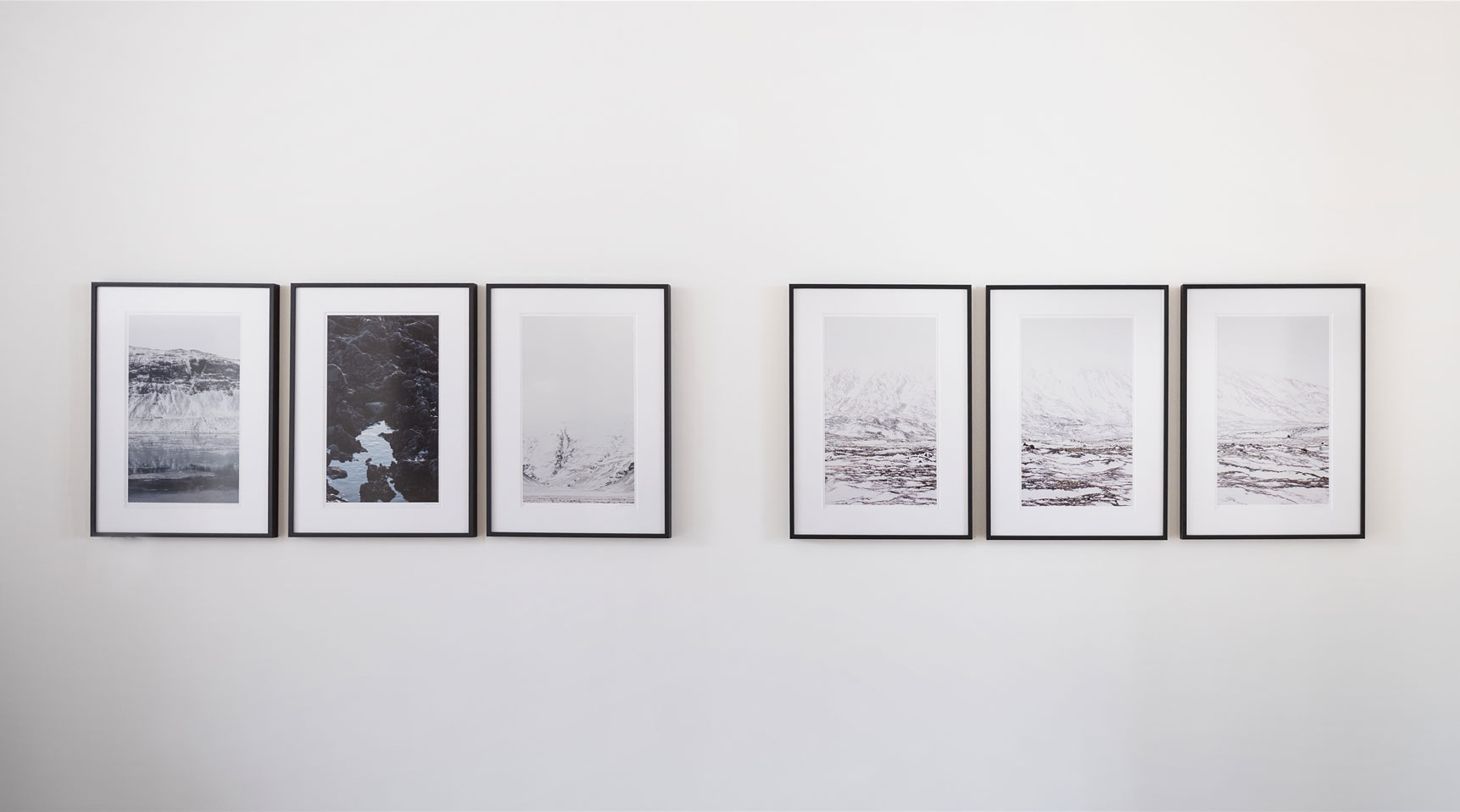 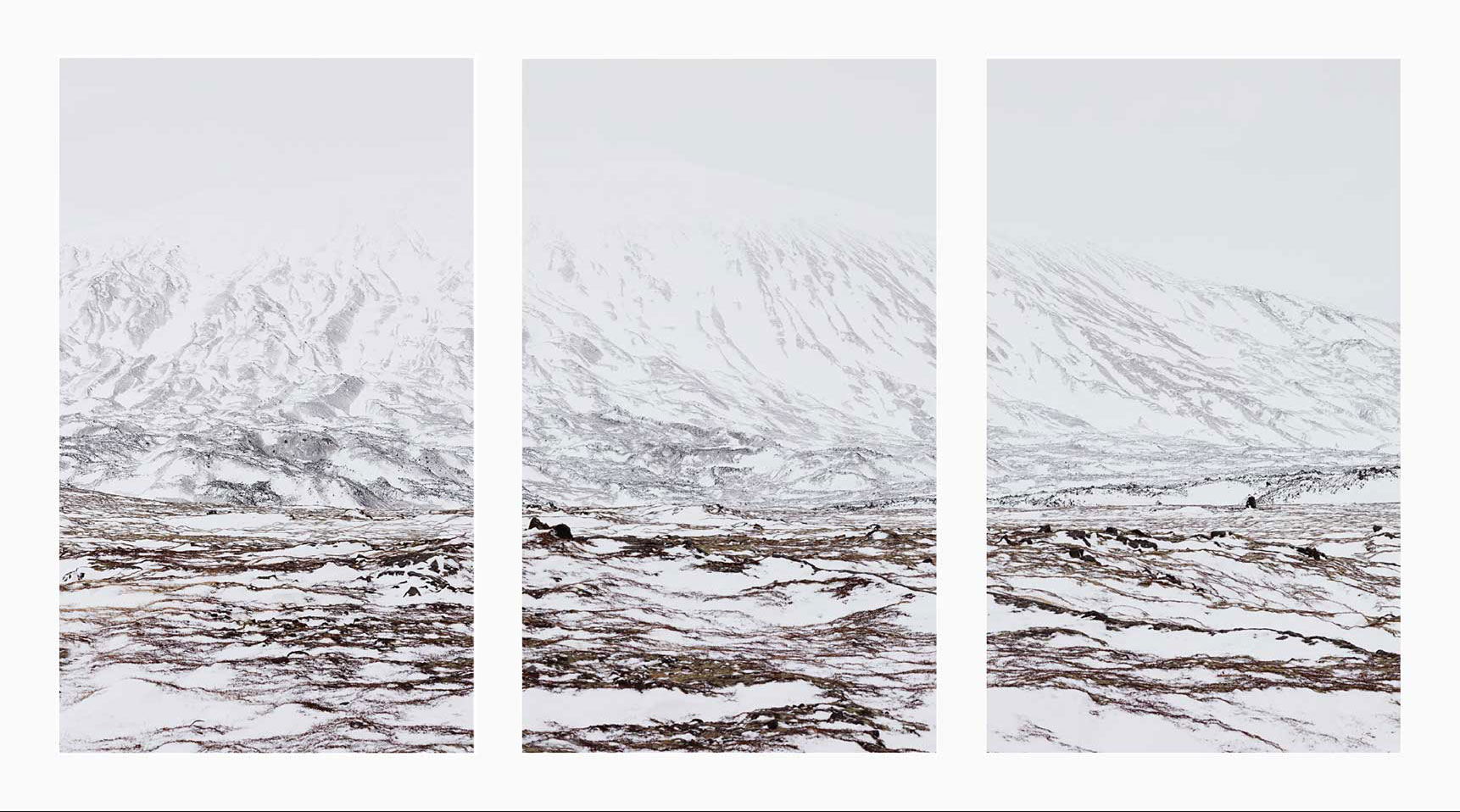 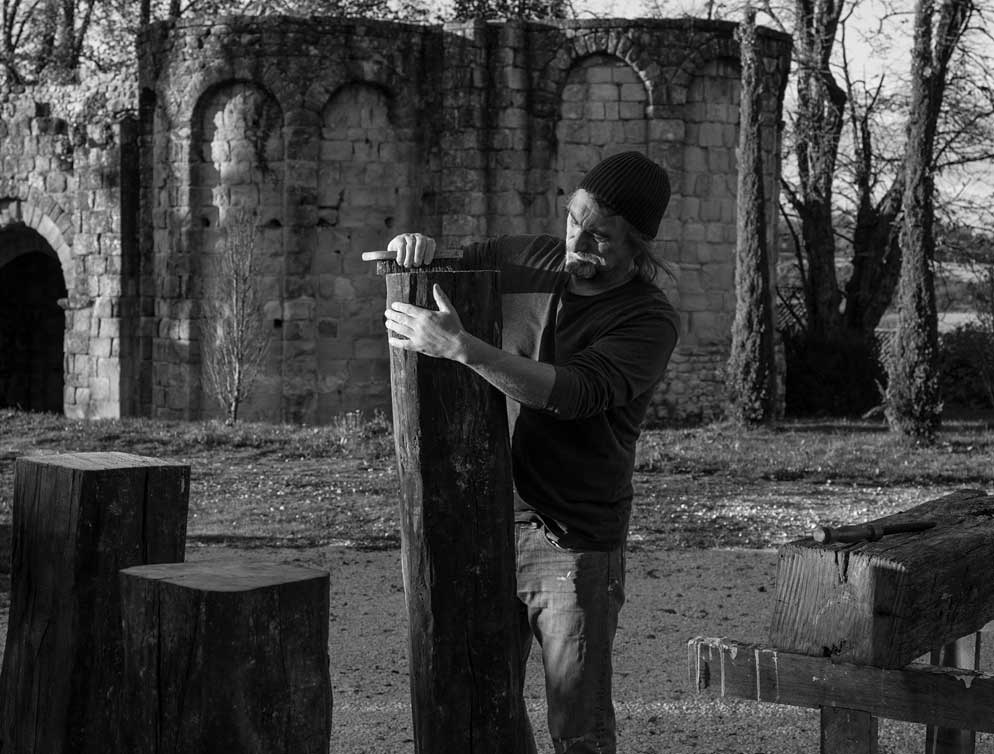 Monoliths
made from hundred year old cedar wood of the cognac cellars of Monnet, France, 2019 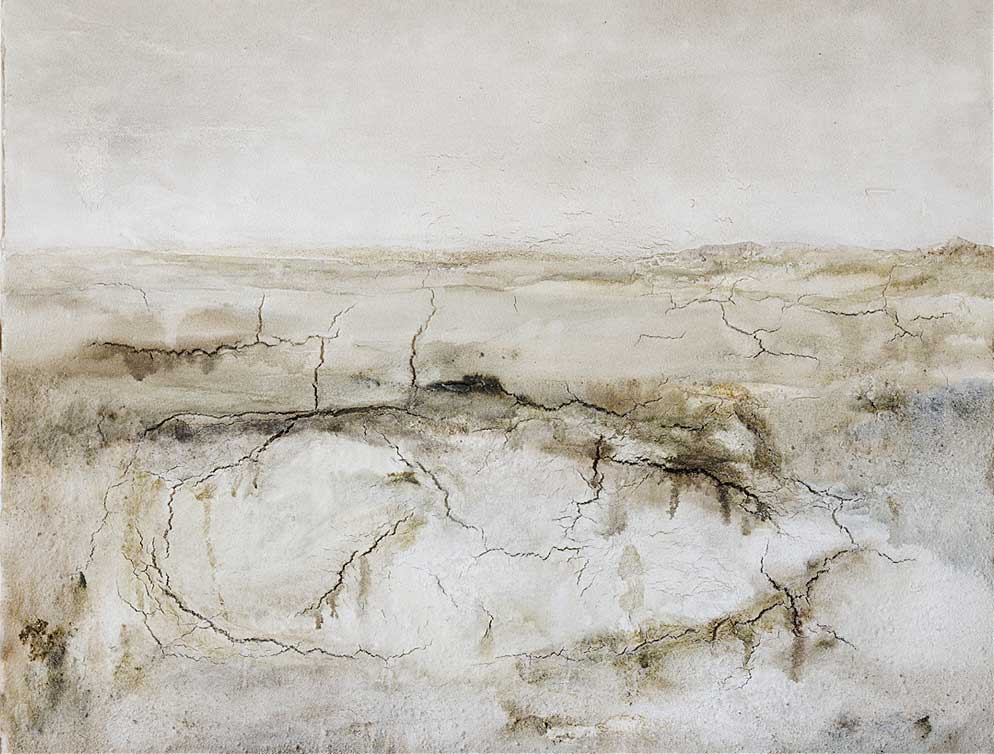 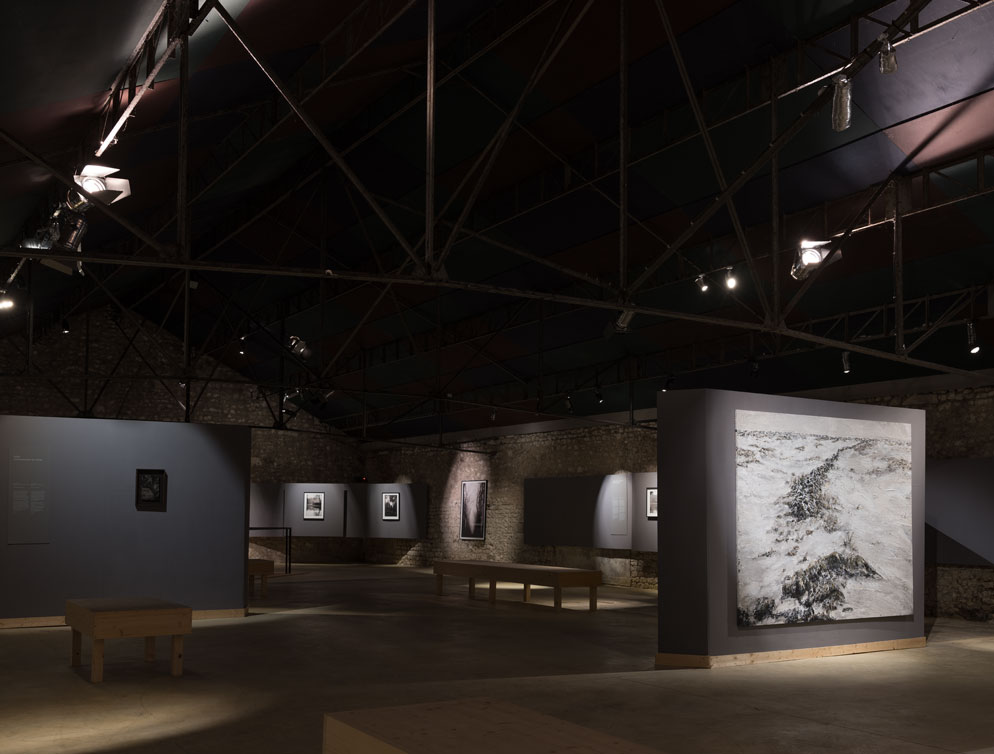